Every year, Hammer awards special families, donors, volunteers, or friends of Hammer with a Community Partner Award. These awards are presented at Hammer’s Annual Spring Breakfast. Take a look at the 2017 Community Partner Award winners, and join us in thanking them for their contribution to Hammer and people with disabilities!

Cindy Scheller is a member of Hammer’s Volunteer Hall of Fame. She has given 1,965 hours of her time in her nineteen years at Hammer. Most of that time was spent with Kelly, who has become a part of her family.

Cindy says, “Our family finds joy in being advocates for people with disabilities. Kelly has taught us about this and we our so thankful for his big heart and love. Kelly is a blessing that goes beyond words!”

The Scheller family spends time with Kelly going out to eat, or hanging out at home with the entire family for holidays. Sometimes Kelly spends as much as a week with the Scheller family during the holidays. He has a special spot on the couch, where he sits to open presents on Christmas morning with the family.

Read the news article in The Press. 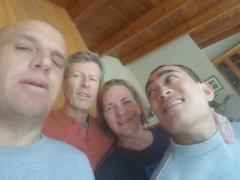 Chris and Peggy Klug have been active volunteers with Hammer since 2005.  For the last six years, both Chris and Peggy have been volunteering with Bruce. Chris does not think of it as volunteering. Chris says, “Bruce and I have a friendship. He is family to me. My favorite memory was the first time Bruce called me his friend.” Program Manger Theo Nah agrees. “Chris and Peggy consider Bruce a part of their family. They never miss a scheduled activity.”

Bruce spends each Thanksgiving at the Klug home for a family get together and dinner. During the Christmas holidays, Chris and Peggy will work with Bruce to get and wrap all of Bruce’s gifts, just to make Bruce happy. Between them, they have given over 892 hours of service. Before leaving the nest, their daughter Tracy also volunteered and accrued over 68 hours of service. That equals 960 volunteer hours for the entire Klug family.

Read the news article in the Minnetonka Sun Sailor

Anne Bailey has been served by Hammer Residences for more than 40 years. Through the years, her family has worked with Hammer to provide Anne with a loving, caring, supportive and educational environment. Anne came to Hammer as a teenager needing to learn life skills. With the help and support of Hammer caregivers, she has grown into an independent, mature adult able to live independently at Stone Creek apartments. Anne now holds a steady job, maintains significant relationships and regularly participates in community, social and church events. Anne is supported and encouraged by her family to learn and grow to her full potential.

Her siblings, Leigh and Linda love and care for Anne, and have a deep sense of responsibility for Anne’s physical and emotional welfare. They have never thought of Anne as being less deserving of the same opportunities they both have in whatever form that takes. Supporting Hammer through board service and financial gifts is a demonstration of the Bailey family’s gratitude and gives them a way to help Hammer provide Anne with the chance to live life to its fullest.

Claire and Rob Alber have 1,192 combined hours of volunteer service between the two them. They have volunteered in various capacities at Hammer, from support service roles at special events to their current role as direct service volunteers with Ted, a man supported by Hammer. Ted really enjoys their company and looks forward to their monthly outings, which consist of going out to Ted’s favorite restaurants. Sometimes, Claire and Rob come to Ted’s home and cook a delicious meal for Ted and his housemates so they can all enjoy a meal together. It is very clear that because of Claire and Rob’s service and commitment to their role as volunteers and Hammer, Ted is experiencing a fuller, more social life.

Paige Goedderz started volunteering with Hammer in 2013 when she was a freshman at Wayzata High School. Paige has accrued over 166 volunteer hours. She wanted to become more involved in her community and to make a difference. According to then Rockford Program Manager Regan McGowan, “Carla’s volunteer, Paige, has been awesome! She really tunes into what Carla likes to do. They have gone to the movies, for walks with her dog, out to breakfast, fishing, ice-skating, and enjoy making crafts.”

Paige’s favorite memory is going to Carla’s Special Olympics swim meets with the rest of the Rockford ladies. Paige has said that by volunteering she has not only made a difference in Carla’s life, but in her own as well. “It doesn’t feel like volunteering. It is a friendship. It has made me a better and happier person.”

Read the news article in the Lakeshore Weekly News.

Andrew Ervin’s Human Services career has spanned over thirty-seven years. He was a Program Manager with Hennepin County from 2007 to March 2017, when he worked in partnership with Hammer Residences. During the last seven years of his career, his main focus was on developmental disabilities case management and annual assessment work. During his time at Hennepin County, he was also a member of the Long-term Services and Supports Management Team.

During his career, Andrew led a team of experienced and dedicated supervisors in a period of rapid change. He played an important role in supporting the expansion of housing and employment opportunities for individuals with disabilities. Andrew’s work was also focused around the development of residential opportunities for individuals coming out of institutional care and with extraordinary behavioral and/or medical needs. Because his work encompassed a variety of areas, Andrew worked closely with many providers, one of which was Hammer Residences.