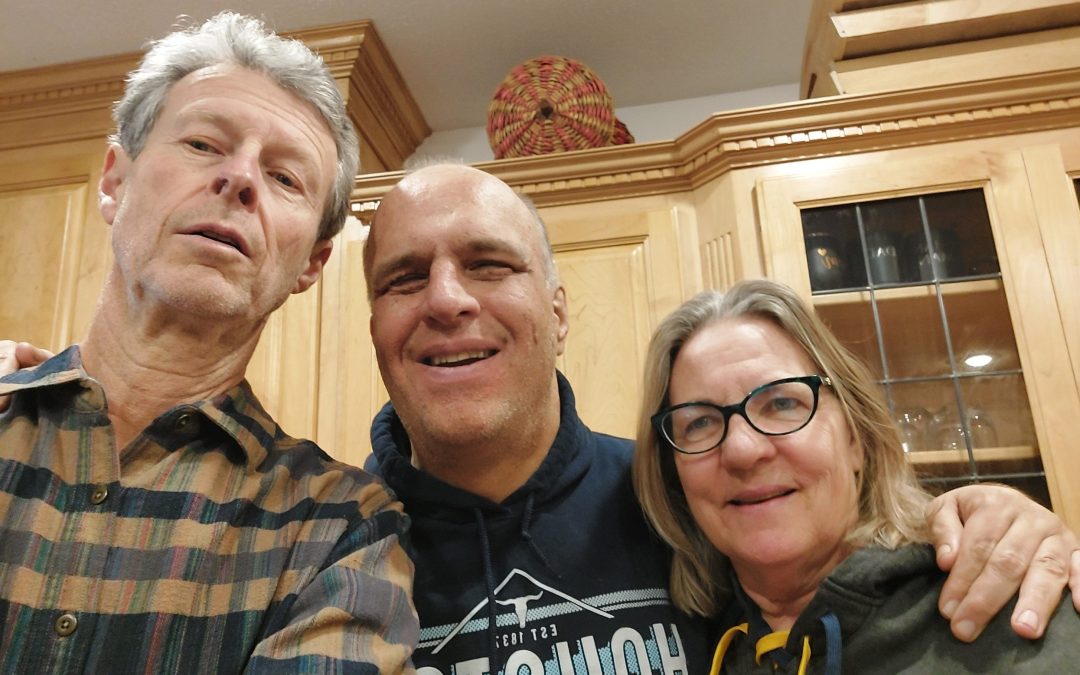 Chris has been a one-on-one volunteer with Bruce Duffney, a member of our Hammer & NER family, for 10 years. The two men get together every couple of weeks to do Bruce’s favorite thing: spend a few hours hanging out at the Klug home with Chris and his wife, Peg.

“Bruce wants to do the same thing every single time,” Chris says. “We have a routine. I usually pick him up around 11:30 a.m. and return him home by 2:30 p.m. My wife, Peg, is usually here and a part of our time together. Bruce loves to go through magazines and catalogs we save for him and look at the photos. He sits at the counter and tears them up. I make him lunch and it’s the same thing every time: he loves a peanut butter sandwich, chips, and a granola bar for lunch.”

Bruce also likes to make lists. “Each visit, he brings me lists to send to Santa or the Easter Bunny. I assure him they’ll get where they’re supposed to go.” For Christmas, Chris gave Bruce a plastic zip folder and a leather folder. “He just loves that stuff,” Chris says. “He’ll take the pictures he’s torn out of the magazines and catalogs and stuff the folders full of them.”

After lunch, Chris will suggest they go into the living room to relax for a while. An avowed creature of habit, Bruce always requests one song and one song only, Michael Jackson’s “Beat It.” Chris says they’ll listen to it half a dozen times. “I try to mix in other songs in between. I’ll say, ‘What do you think of this song, Bruce?’ No. All he wants to hear is that one song. He knows all the lyrics and can sing along with it. We have a little joke: When we’re in the driveway, getting ready to take him home, Bruce will sing “Beat It” at the top of his lungs. I tell him my neighbors call to ask if Michael Jackson was here. It’s that routine every time.”

Chris says that occasionally, in the summer, they’ll stop and get ice cream, but any suggestions to do something different, he’s not interested in, and he makes it quite clear. “We’re doing what he wants to do,” Chris says. “I figure he should be able to do what he wants.”

What drew Chris to volunteering? “Peg and I have a son, Chan, with special needs who moved into the (west metro) Kentucky home four years ago. His life has been made so rich. I wanted to volunteer and prefer doing something hands-on, something 1:1,” he says. “I went online, and you could plug in your interests. I found out about someone living at a group home, without family in town. To not have somebody special coming in to take you out for a weekend, when you see other people going out with their families for a day or a weekend—I wanted to find someone who doesn’t have any family—that seemed right to me. It turned out to be the right choice,” Chris says. (Bruce has no family in the Twin Cities, but enjoys visiting his brother in Houston, Texas for Christmas each year.)

Since Bruce attends his day program during the week, he visits with Chris and Peg every other weekend on a Saturday or Sunday. “I enjoy getting together with Bruce as much as he does,” Chris says. “It’s so easy being with Bruce. There are some humorous times. He’ll say or do something, and Peg and I will look at each other and chuckle. It’s fun having a guy like Bruce around.”

What advice does Chris have for someone who might be thinking about volunteering? “If you don’t have experience with people with disabilities, just give it a try. I think you’ll find it is quite different than you may think. You get back so much more than you put in and the relationship is a fun thing. Taking the initial plunge may be hard for some people. If the first experience doesn’t work out, try something else. It’s really rewarding.”

Thank you, Chris, for all the volunteering you and Peg have done with Bruce and for the wonderful relationship you’ve nurtured with him.

If you would like to learn about volunteer opportunities in the west metro or in the east metro, our Director of Volunteer Resources, Cathy Thoma, would love to chat with you. You can reach her at: cthoma@hammer.org or 952-345-8554.