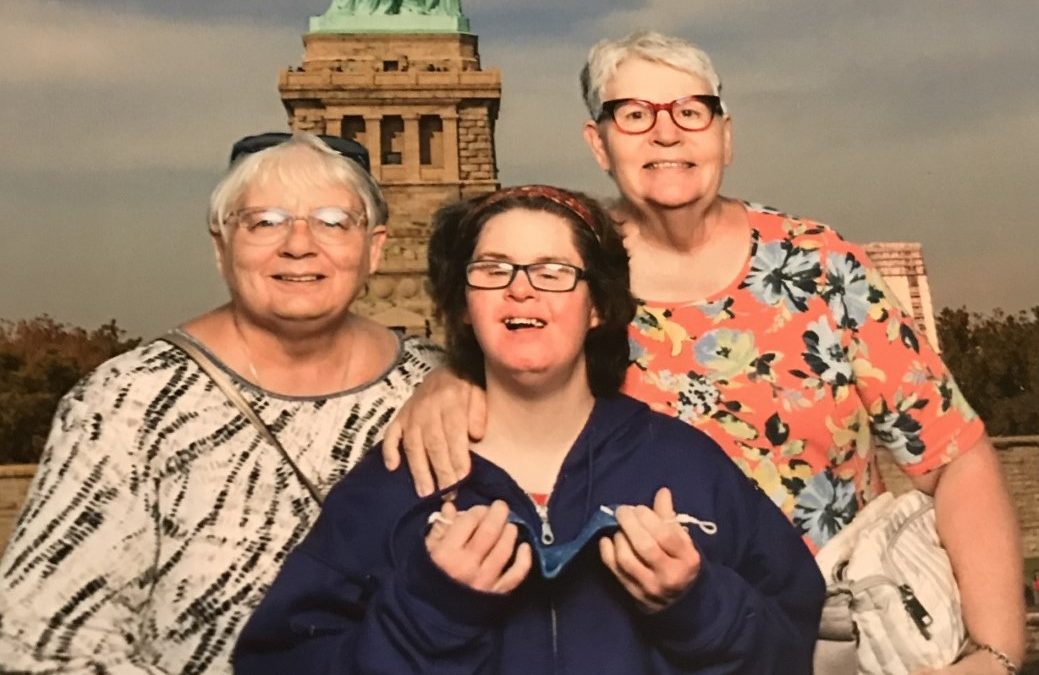 Her Smile Lit Up Times Square!
By Joanne Heller

Our daughter, Jennie, who recently turned 47, has resided at the (east metro) Cedarwood home for 24 years. Throughout her life, Jennie, who was born with Down syndrome, has struggled but persevered. When she was starting to crawl and grabbing things, we noticed she was reaching too far away from things, like a table or a chair. We took her to an eye doctor and learned there was something wrong with her depth perception. The doctor told us, “What do you expect? She’s retarded.” We took her home and I cried for two days.

I was in a Down syndrome support group at the time, and someone said, “Don’t ever let a doctor tell you that again.” We took her to another doctor and set her up for corrective surgery. When we went in for a follow-up appointment, they put glasses on Jennie. She looked at me and smiled and kept touching my face, my lips, my nose. It was so beautiful. That day we took her outside and let her play in the grass. She was fascinated with a blade of grass.

That support group of mothers with children with Down syndrome saved my life. I could go to them and share experiences that they, too, had experienced. We made a list of things that would help new parents. The National Down Syndrome Society has always been a helpful resource for our family.

Earlier this year, I decided to submit Jennie’s photo for the 2022 Times Square Video which is a part of the annual National Down Syndrome Society’s “NYC Buddy Walk.” The video kicks off the event and promotes inclusion. They received 2,500 applicant photos and selected 500. Jennie’s was one of them! Our family was so excited. Since my husband doesn’t like to fly, my sister, Linda, said she would go with Jennie and me. But we decided we wanted the video to be a surprise for her. We told her we were taking her to New York for a vacation. 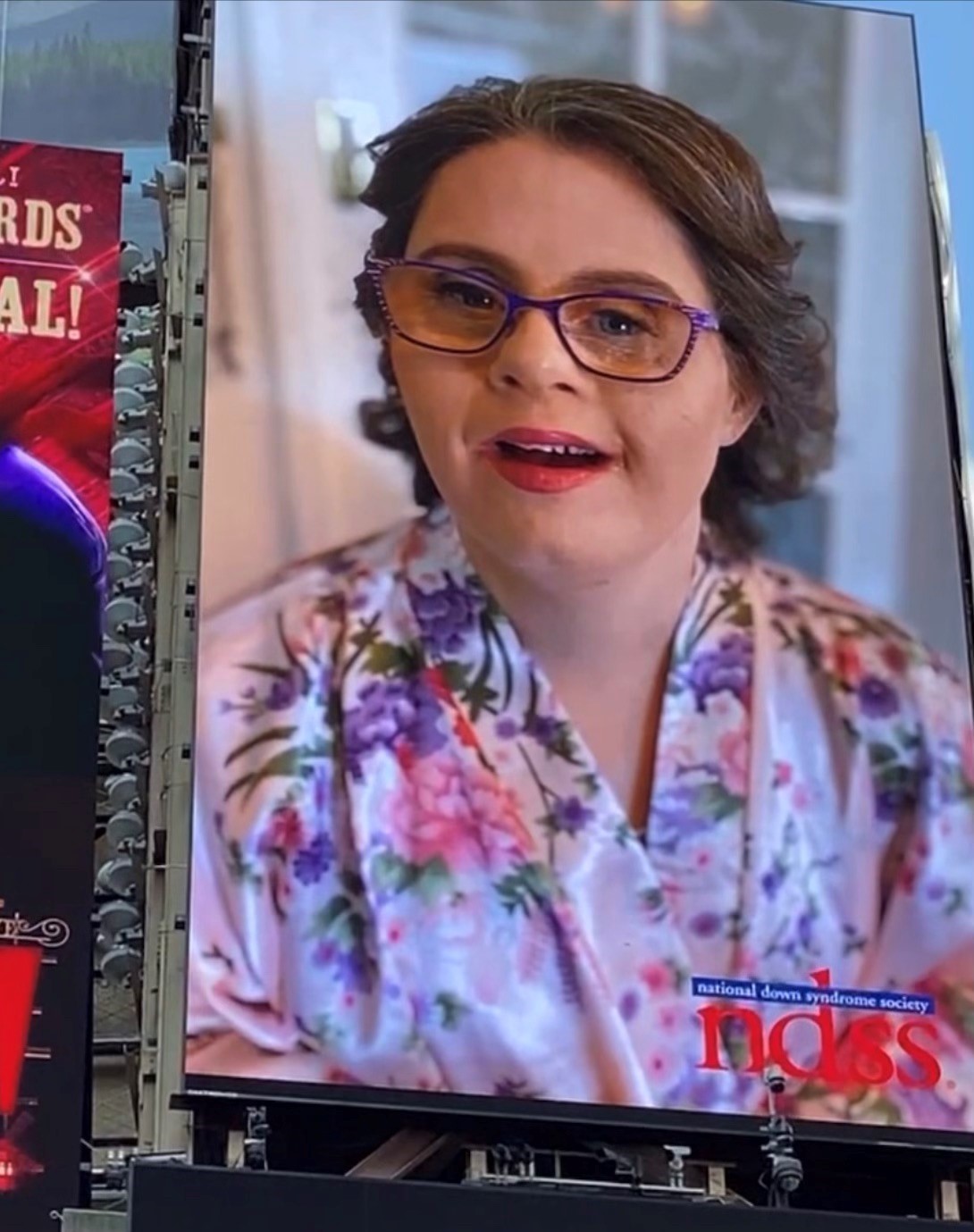 Jennie got to see herself on a Times Square jumbo screen!

Thursday, September 15
We left for the airport around 9:30 a.m. to catch our 11:30 flight. Jennie started getting a little nervous when we got to the gate. I assured her it was going to be okay. As we boarded the plane, Jennie asked the pilot, “You go slow?” He said yes, just to make her feel better. When we arrived, we had a long taxi ride to our hotel—in rush hour traffic.

Friday, September 16
We spent the day sightseeing around the Big Apple. It was our first time to New York City. We went to see the 9/11 Memorial, which was so moving. We also took a boat cruise around Ellis Island and saw Lady Liberty. I didn’t realize she was so big!

Saturday, September 17
The big day! The big reveal of the video in Times Square was scheduled for 9:30 a.m. There must have been a thousand people there. There was a group of people we gathered with to experience the video up on a huge screen in Times Square. I told Jennie we were going to a show, a video, and she said, “Oh, I’m in that video, huh, Mom?”

The little stinker had figured out her surprise. I was so excited waiting for Jennie’s photo to come up. When it did, we all cheered. “Mom, that’s me!” Jennie said. She was clapping and had a big smile from ear to ear. She looked at me and said, “I told you, Mom.”

Afterward, there was a buddy walk to Central Park. We didn’t participate in that, but we did stay in Central Park for quite some time and did some exploring. Times Squares is a lot like downtown Las Vegas—lots of big lights, noise, and people! A homeless man tried to hand me a little bottle of Vodka. I gently declined. Later, we went out to dinner to celebrate my birthday. 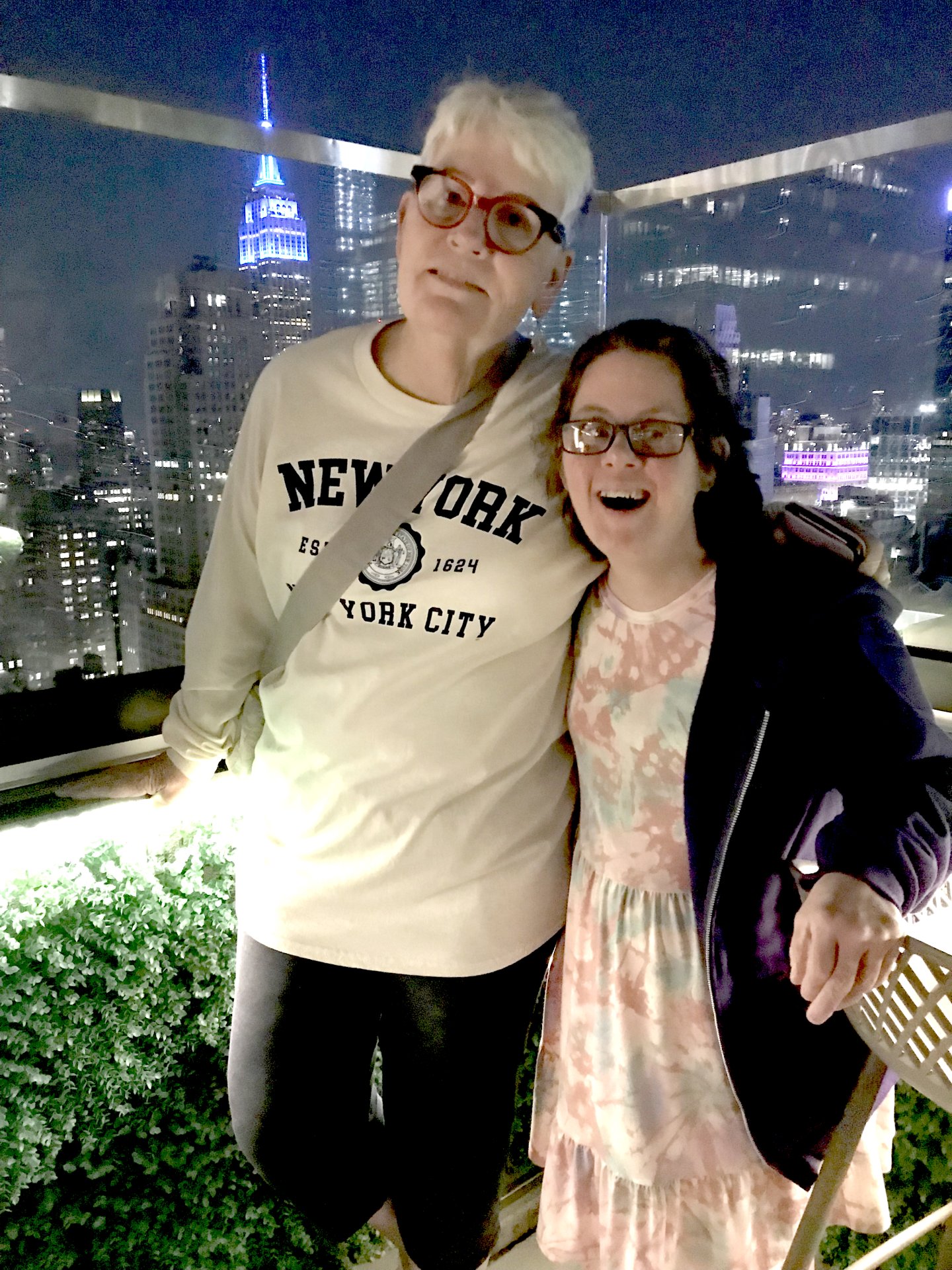 Sunday, September 18
We flew back home and arrived at Cedarwood around 5:30 p.m. Even though it had been a long day, Jennie couldn’t wait to tell the staff and her housemates that she was in a video. She was so excited. She wanted to bring back little gifts for everyone, so when we were in Times Square, she bought cute little M&M containers. No one in the house knew the reason for the trip to NYC, so I told them about the video. Everyone said, “Jennie you’re a star!” Jennie smiled and clapped her hands. I know she really enjoyed the experience. She kept saying, “Thank you, Mom.”

Jennie’s done a lot in her lifetime. She’s been competing in Special Olympics for 38 years. I was a mom on the sidelines, cheering. I wanted to do more so I started coaching. In 2007, Jennie was one of 16 athletes in the state of Minnesota who was selected for Team USA and went to Shanghai, China for three weeks of competition. We were so excited. She brought home one bronze and two silver medals in bocce ball. When she was up on the podium and the official put that silver medal around Jennie’s neck, I just lost it. I called my husband to tell him Jennie had received her first silver medal. Then, in 2010, Jennie was selected for the national team and went to Nebraska and medaled in bocce ball, earning one gold and two silver medals.

Although she’s slowing down a bit, Jennie is still active in Special Olympics. And she calls us a couple times a day to chat. She’s the oldest of our three children. Our daughter, Jody, and son, John, also live here in the Twin Cities.

I’ll always cherish this trip to New York City with Jennie. It was so meaningful to our family and such a gift to Jennie.

To learn more about the 2023 Times Square Video and Buddy Walk, please visit https://ndss.org. Submissions for the 2023 video will begin in early 2023.