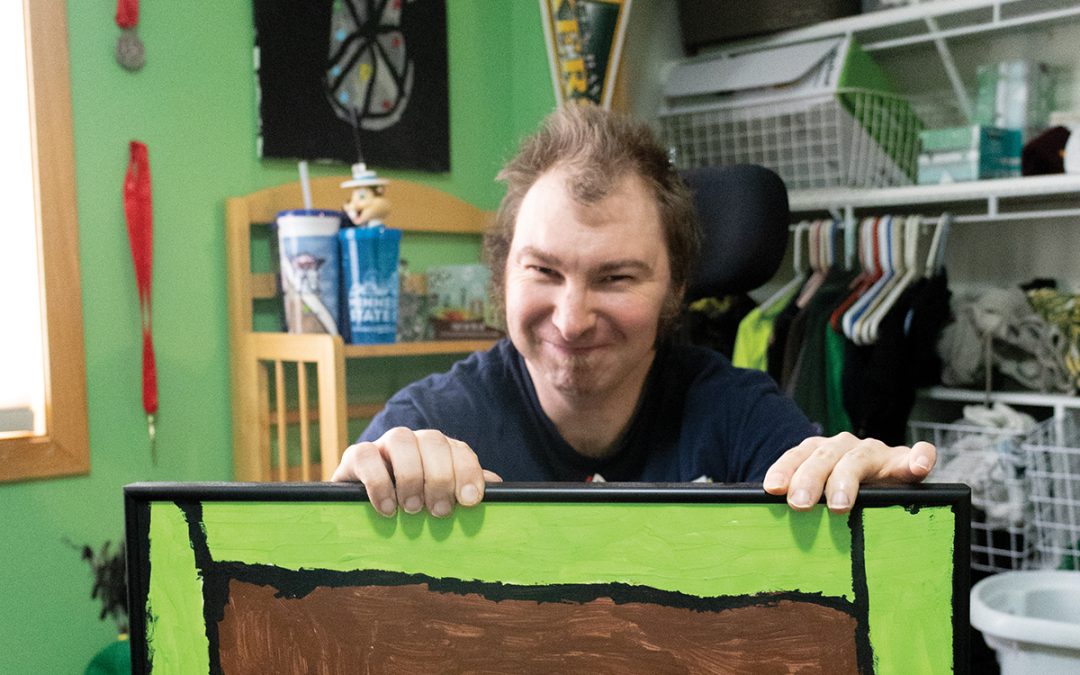 Painting is an outlet for this creative soul 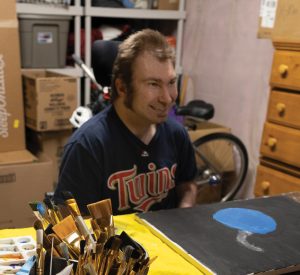 Josh shares his story and passion for painting!

Josh Buell loves to paint and he’s pretty creative! The walls of Hammer’s Jersey home in Golden Valley, where Josh has resided for the past year-and-a-half, are decorated with his work. Being an artist happens to run in the family. His mother is a full-time artist as a photographer and jewelry maker. Both sets of grandparents are artists (his grandfather was also an art teacher). His uncle is a well-known glass blower. So, how could Josh not be an artist? 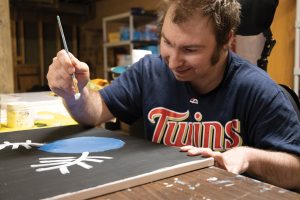 Josh uses his “mind’s eye” to create a unique bowling ball with antlers.

Josh shows a visitor the studio he has set up on the lower level of the Jersey home. Sometimes a buddy, another artist, comes over and paints with him. “We talk like  crazy,” he says. “When I paint, I like someone to talk to.” Other times he listens to music. “Classical and gospel and some pop,” he says. “I like Beethoven. It calms me.”

Josh sits at his worktable, surrounded by jars of brushes and trays of acrylic paints. Next to him is a new rolling cart with drawers. “I didn’t have enough room for my paints, so my mom bought it as an early birthday present,” he says. Josh recently made a trip to Michael’s craft store to buy some new brushes. “My other ones were crap,” he says as he shows a visitor his newest brushes. “I’m not usually a fan of big brushes, it depends on what I’m doing.” He says he will use them to lay down a background.

Paintings in various stages of completion are spread out on tables. Josh will typically paint three or four days a week for two to four hours at a time. Lately, Josh has been working on a series of paintings of bowling balls wearing antlers, something he saw at a bowling alley. “I’m trying to get it perfect,” he says as he adds small touches to the shape of the bowling ball. Many of his paintings have a touch of whimsy to them. He likes to paint everything from animals to geometric shapes. A painting of a blow dryer lies nearby. 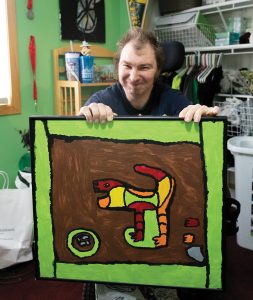 Josh and his favorite painting.

When Josh finishes a painting, his mother, Kim, photographs them and uses the pictures to makes cards and prints to sell at a local coffee shop and the Northeast Farmers’ Market. “He has a following,” Kim says. “People seek him out and want to buy his new work and see him and talk with him. He’s sold several originals in the past.”

As with many of the individuals Hammer and NER serve, Josh deals with many medical issues and has undergone several surgeries. “He’s had a lot to deal with,” Kim says, “but he’s very determined.”

Kim says TikTok has really buoyed Josh up. “He doesn’t like to paint alone, but he found out if you can get a thousand followers on TikTok you can do live artwork. He figured out how to do it, that’s how determined he is. He wants to paint and now he can paint live on TikTok as well as paint with other artists. He’s made a good friend in another state.”

What’s the nicest thing someone’s said about his painting? “Amazing,” he says with a smile.

“It brings him joy,” Kim says.

Josh is scheduled for another surgery this fall. We wish him smooth sailing and a speedy recovery.

If you prefer a printed copy mailed to you, please send your name and address to Jennifer.Hipple@Hammer.org, and you will be put on the mailing list.