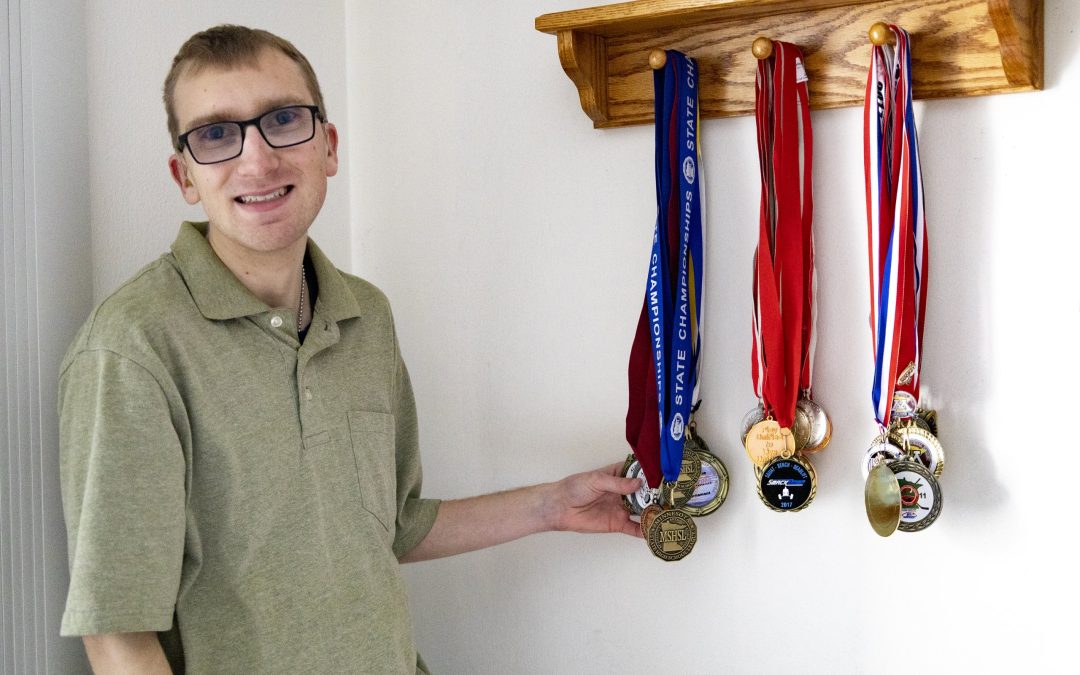 Justin’s Story–We couldn’t have asked for it to be any better!

That’s how we felt when our son, Justin, moved into his own apartment at Plymouth Colony in August 2020 and our family became part of the Hammer family. Like you, we have read of other families’ Hammer stories and been inspired by them. Now, we would like to share ours with you. 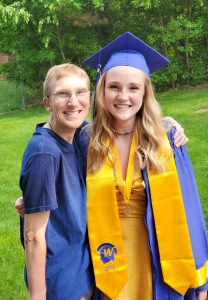 Justin and his sister, Audrey, both graduated from Wayzata High School and were active in team sports.

Our family has lived in Plymouth for 10 years. Our son, Justin, is 25 years old and is developmentally delayed, visually impaired, and hard of hearing. Justin plays Minnesota Special Hockey and also does Special Olympics. Our daughter, Audrey, is 21 and is at the U of M pursuing a degree in teaching. Justin really looks up to her.

Living at Plymouth Colony is Justin’s first endeavor of being on his own. Like other parents, we’ve always looked forward to both of our children going out into the world to live their own lives—to be happy and successful and to explore what life has to offer. We’ve always tried to do our best to prepare them for that, but there’s also a little bit of fear and anxiety that goes along with it.

Justin graduated from Wayzata High School in 2016 and then participated in a two-year transition program focused on life skills. He then attended Bethel University for two years in their new BUILD program, created to help adults with special needs work on their independent living skills. Justin proudly graduated with a Certificate in Independent Living in May 2020.

Our son has worked incredibly hard towards his goal of living on his own. 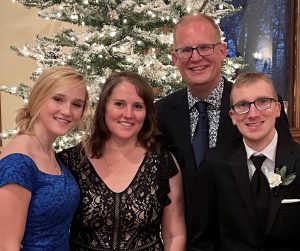 We had started looking at Hammer and similar providers in fall 2019—we figured it would be quite a wait before a place became available. Justin values his independence, so we were looking for a program where he could live in his own apartment but still have supportive services nearby when he needed them. When we learned about Hammer, we felt we had found a good fit and they agreed! We were so relieved when, just a month after Justin graduated from Bethel, we got a call from Hammer saying they had a space for him. It just took away the stress and the fretting. We couldn’t have asked for it to be any better. For Justin, there was a very natural progression of graduating from Bethel’s two-year program to moving into his own apartment with Hammer, which happens to be just a mile away from us.

This innovative program is exactly what is right for Justin right now. 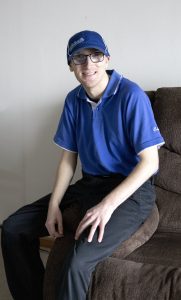 Justin getting ready for his shift at Culver’s.

When you meet Justin, he’s 5’3, maybe 110 pounds, so he kind of looks like he’s about 12 unless he doesn’t shave and then he looks like a 12-year-old with a beard. He can be goofy and is extremely friendly. He’s always been happy go lucky, but he’s also a rule follower to to a fault. He’ll sigh if we go through a yellow light—he’s an excellent backseat driver. Justin is also a hard worker and definitely a people pleaser. He’s really good at picking up on what others are feeling. If you’re having a bad day he’ll come right up to you and say, “Hi!” and he makes silly faces. If you’re not in a good mood he wants to help you get into a good mood. He likes to make people smile.

Justin works for Lunds & Byerlys in Plymouth as a courtesy clerk. He bags groceries and then takes them out to customers’ cars. He likes doing that because he gets to see a lot of people and talk to them. He also works at Culver’s. He started working there in high school and enjoys running into people he knows.

Justin uses the Plymouth bus system to get around and knows how to schedule his rides. He is very skilled in using the computer and knows the apps on his phone to help him be active in the community. He knows how to do his own laundry and does his dishes every day on his own without any reminding. He likes to keep his space clean and orderly. (When he was little, Justin would hand me the crumbs off of his high-chair tray!) 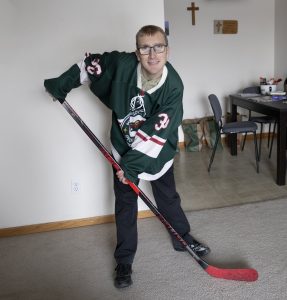 Justin’s still working on his cooking skills with help from his caregivers. He usually eats dinner at the community apartment with others from Hammer. Dinner time has helped him to make connections, build relationships, and build community.

When he’s not working, Justin likes watching any and all sports. He does a lot of Special Olympics and every season he’s in a different sport. He’s very proud of the fact that he can play ice hockey and wear the full gear. He’ll tell you that he skates as fast as the Wild players. When he was in grade school, Justin would walk down the hall with his head down not engaging; no eye contact. But when he started playing for Minnesota Special Hockey it put him on the same level as the rest of the kids. He started to say “Hi” to people in the halls and it just blew his confidence out of the water. It was awesome.

Justin values his independence but requires the type of supportive services Hammer provides.

Living at Hammer has been really good for Justin. There is support and help there if he needs it. The staff at Plymouth Colony check in on him every day. He has a nice connection with one of the staff whom he seeks out during the day for a conversation. He also likes to go and have dinner with old friends from high school on occasion. Justin will let the staff know if he has plans after he finishes his work. They may call or text him to say, “How’s it going?” or “How are you doing?” And for us as parents, it means we’re not sitting at home stalking him on our Apple device trying to figure out where he is. We’re just confident knowing someone is there if he needs it. It helps Justin to feel comfortable and secure, too. 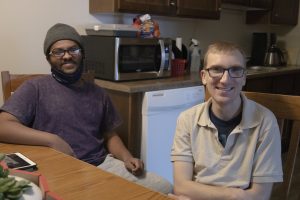 Justin appreciates having consistent caregivers. The staffing shortage is really a challenge, but your gift helps Hammer keep dependable caregivers like Abdullahi.

When he goes to bed at night, Justin takes his cochlear implant off and his hearing aid. He wouldn’t be able to hear if the building fire alarms were going off. However, before Justin moved into his apartment, we made modifications to make it a safer environment. He now has an emergency light system that will go off if smoke is detected in his apartment, and his staff know to go get him in the event of a fire alarm or tornado siren at night. That’s very reassuring to us as parents.

We’ve always wanted Justin to be successful and be in a place where we know if anything happens to us that he will be okay. It was important to us to be involved in finding a place now for Justin, instead of somebody else, like our daughter, having to take him in or find a place for him. We know that with the flip of a switch, Hammer could step in 100 percent. This way we were able to be part of it and Justin could be confident being on his own, so if something happened to us it wouldn’t be so dramatic for him.

We’re really glad Justin is a part of the Hammer family. He is living his dream of an independent life, and we have the peace of mind and confidence of knowing he is happy and in a safe and supportive environment that is enabling him to live his best life.

Many people served by Hammer do not have family to lean on and help with their needs. With government funding only providing the basics and rising rent, Hammer relies more and more on fundraised dollars from donors, volunteers, family members, and community members.

Will you please make a gift of support today to help Justin and everyone served by Hammer live their best lives?