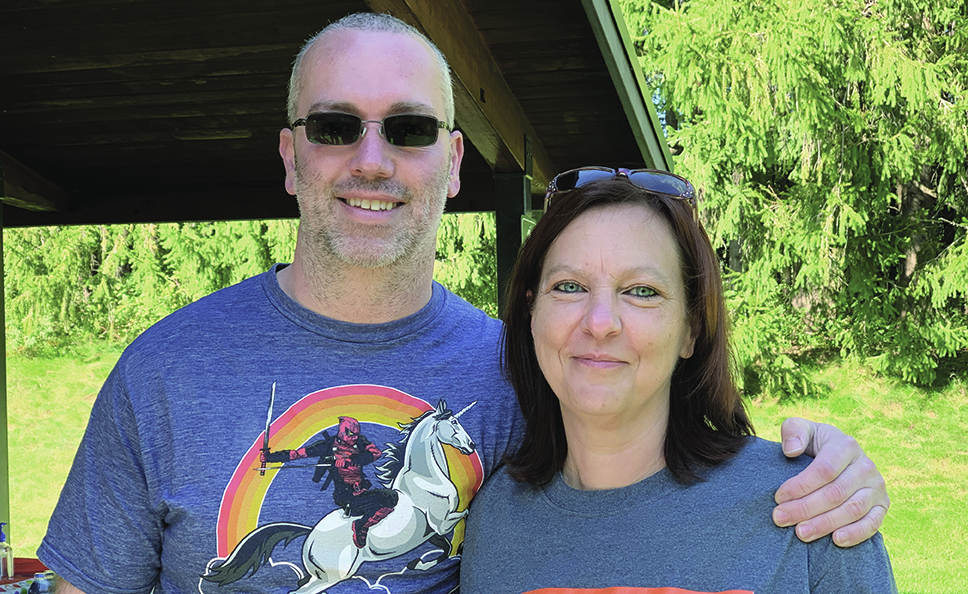 If it wasn’t for a faulty credit card at the checkout counter at Target, Wade and Michelle Hartmann, who both work for Northeast Residence (NER), might never have found love. 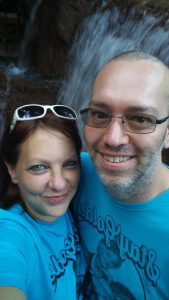 Michelle and Wade Hartmann both work at Northeast Residence at different locations.

Wade Hartmann was at Target one day, buying supplies for the group home where he worked when his charge card wouldn’t go through. “I had $200 worth on the conveyer belt,” he says, “and I thought, ‘what the heck?’” As he looked around and wondered what he should do he happened to see Michelle Reynolds coming toward him. She worked for another NER home. “We’d never spoken, but I knew who she was,” Wade says. “She was shopping for supplies, too. I explained the situation and asked if she thought I could use her house’s charge card and then we’d figure it out.”

“Well, I suppose,” Michelle said. Afterward, the two walked out of the store together and Wade got up the nerve to ask Michelle out. She declined.

Over the next few months, Wade and Michelle would occasionally run into one another at work functions. “We used to do shared activities at our houses for the individuals we serve,” Michelle says, “like game night, barbecues, or Halloween parties, and it went from there.”

“But it took some time,” Wade says. The two began dating and became engaged about a year later. They married February 11, 2014.“If that charge card had been fine,” Wade says, “we wouldn’t be sitting here together.” 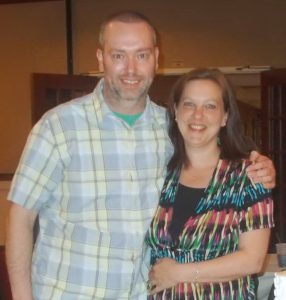 Wade and Michelle Hartmann at their wedding reception hosted by NER.

Today, Michelle is the Program Manager at Hale and Wade is a Lead DSP at Hwy 96. They are just one of many couples who have worked for the organization over the years. Some, like the Hartmanns, met their spouses through work. There also are several cases where multiple family members work for the organization in various roles.

“It’s the family atmosphere,” Michelle says. “We’re a very tight-knit group. We really feel supported. When Wade and I got married, NER hosted a little reception for us with cake, gifts, and all that kind of stuff. They’re just very supportive of us and I think the trust you have within a company can make a big difference in how you do your job.”

Working with people with special needs requires a great deal of mental and physical energy. Add to that the grueling challenges of a pandemic along with staffing shortages. How do the Hartmanns handle it?

“It’s so nice to have a spouse who understands what you do,” Michelle says, “to feel supported and valued in your work. One of the things that helps me be successful is having a spouse in the field who understands that there are times when my phone rings and I find out I need to grab my pillow and go to work and sleep there (to help cover a shift). Having a partner who gets what you do is huge.” 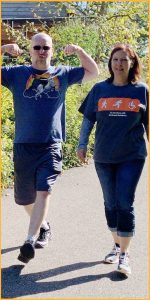 Wade and Michelle at the Walk Run Roll event for NER.

Wade says, “Back in about 2007, we both began managing homes. It was a very difficult job, and we both worked hard over the next several years to become very good at every aspect of it. A huge benefit that we both took advantage of was that since we were in a relationship, we were able to teach each other our strengths and improve each other in our areas of weakness. We were able to bounce ideas off each other. Most tasks that were asked of us we were able to learn together and sometimes complete together. We became competitive with each other in areas like our quality assurance scores and perfect timecards. When you have two people as part of the same company and especially the same position, two heads are definitely better than one.”

The Hartmanns also enjoy volunteering at NER’s various events and fundraising activities. Wade has helped Michelle and the staff at the house she manages, along with the women who live there, throw the annual NER luau picnic for the past 13 years at a park in Oakdale. “We serve roughly 350 people, which includes the people we support, their families, and all of our employees,” Wade says.

“It’s nice when we can volunteer together,” Michelle says. “It makes it more fun when we can do things together.”

Congratulations on your recent wedding anniversary Wade and Michelle. And thank you for all that you do for the individuals we serve. 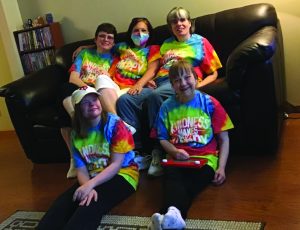 Michelle with the women supported at Hale House in Oakdale. 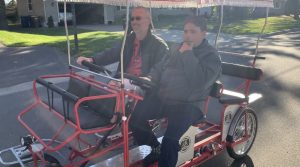 Wade with Andy, supported at Hwy 96 Home in White Bear Lake, on a bike ride.