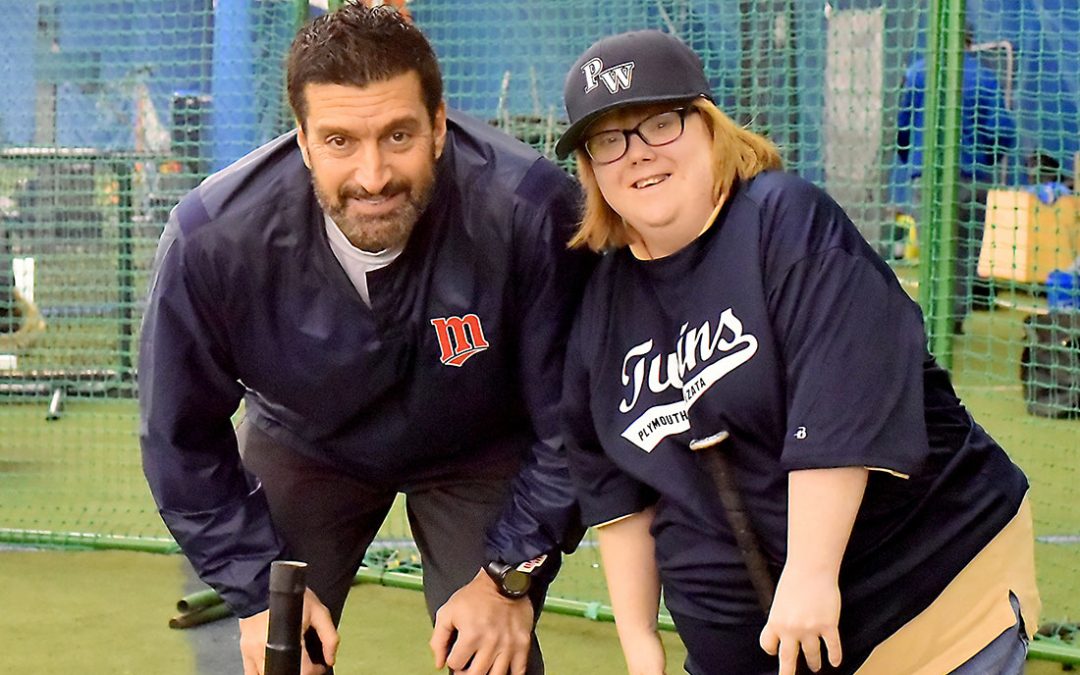 Baseball in January you might ask? …well our answer is YES! Baseball is usually considered a summertime sport, but this year, during one of the coldest days in January, Hammer held its 4th Annual Hammer Home Run event in the Wayzata Middle School dome. Many people showed up, ready to play and eager to enjoy the time spent with friends both old and new.

As a staff member, I look forward to this event as much as our individuals. This year there were over twenty high school and college baseball players,  joining in the fun with about twenty individuals from our many programs, with Hammer staff, Wayzata Baseball coaches and Scott Leius, former Twins player. Three cheers to all of them!

The Wayzata baseball players assisted the players from Hammer in getting their game day t-shirts and hats on, which were donated by the Wayzata Baseball league. The volunteers were then matched with players and they started working  on their throwing, hitting, and catching skills. There were several different stations for individuals to shine and show off their amazing talent. In the end, the main focus was to do what they came to do – PLAY BALL!  As always, the final game was the highlight of the day.

Getting ready to bat with Scott Leius.

Throughout this two-hour event I was so impressed with the volunteers. They were engaged in what our individuals had to say, and they initiated conversations as well. One of the young men overheard Tristan (supported by Hammer) say that he had a baseball field in his backyard and that the boy scouts had built it for him. The young man exclaimed, “I could have done that instead of a park bench for MY Eagle Scout Project!”

There were many awesome moments during the event, and I’ll share a few that stood out to me. Michael is supported by Hammer in his home. He is not able to run the bases anymore but he sure can hit! He had a pinch-runner and told him that ‘he had better run really fast for him’, then continued to egg him on. I hadn’t seen an individual we support named Nels since this summer, and when it was his turn up to bat I couldn’t resist saying, “Batter Batter Swing,

and a Miss!”  As payback, Nels kept trying to creep up on me to scare me…but you kind of notice Nels coming up behind you. Another individual, Kris, was helping her new friend Amy getting out of her comfort zone. This was a joy to watch. Amy is usually very shy. Today, however, Amy broke out of her shell and was having a wonderful time as she hit the ball and ran the bases with the rest of her teammates cheering her on.

From Scott helping the individuals with their hitting skills, to everyone cheering our individuals by name as they ran the bases – this was by far one of my favorite events to attend. No one went away with tears that ‘they couldn’t’ because no matter what your ability or situation, everyone was included.

Again, HUGE kudos go out the volunteers who made this day about the Hammer players. I was so proud and in awe of them and their compassion to make this a great event.  For everyone who played, who watched, and those of us that cheered from the sidelines, thank you. I can’t wait to put this on my calendar for January 2018.