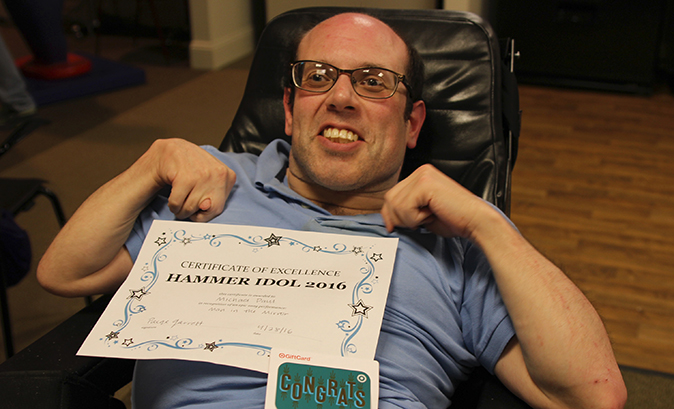 Dupree, our MC for the evening

The excitement was high, with individuals supported by Hammer, staff members, and even members of the Board of Directors gathered at the central office for the second annual Hammer Idol singing competition.

Based on the hit show American Idol, (complete with a panel of judges, a host and a group of extremely talented performers) this was a memorable evening that demonstrated what makes Hammer such a special place.

Performer after performer shined. Singing songs ranging from I Love Rock and Roll by Joan Jett, to Dancing Queen by ABBA, each performer embodied the mission of Hammer, living life to the fullest. The audience sang along, clapping to the beat, waving their arms and dancing with abandon.

Our host for the evening, Dupree (Cedarwood) was very much the Ryan Seacrest of the show. He did a fantastic job keeping the audience engaged between performances, moving things along, and charming everyone.

Personally, I was both excited and nervous to be a judge on the panel. Sitting beside fellow judges Kara Newson (DSP at Eden Place) and Jacob “Simon” Snell (program manager at Lancaster) we each took turns offering up observations, support, and feedback for each performer. More than once I teared up, having a front row seat to the show and seeing up close the heart and soul that each person put into their performance.

Jill (Royal Oaks) was at first overcome by stage fright, and declared she couldn’t perform. However, her friends joined her on the stage and together, they began to sing Kelly Clarkson’s Piece by Piece. As Jill’s confidence grew, her friends stepped away, allowing Jill to shine on her own. This visible and moving demonstration of friendship and overcoming one’s fears, highlights the caring and supportive Hammer community. Jill received a standing ovation and was awarded third place in the competition.

Jacqui (Royal Oaks) sang Karma Chameleon accompanying Boy George on the vocals. She had created a costume that included two shirts she had sewn together, a vest, and a fedora hat with a bandana only available to members of the official Culture Club fan club. Her commitment to her performance, combined with her strong singing skills and stage presence, earned Jacqui second place in the competition.

Michael (Welcome Place) rolled onto the stage and boldly launched into a duet with Michael Jackson’s Man in the Mirror, stunning the crowd with his rhythm and vocal ability.  He announced afterwards that he was available to be represented if anyone in the audience was an agent! Michael’s incredible performance earned him the title of 2016 Hammer Idol.

The evening embodied the culture of Hammer, which is often so hard to describe. Full of life, joyful, and empowered. This is what Hammer does so well.